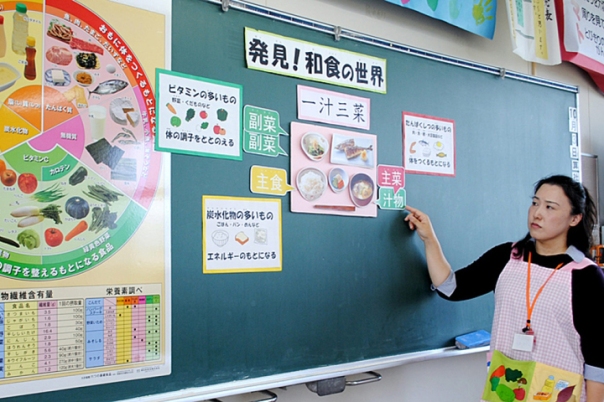 In Japan, since the middle of the last century the nutrition of schoolchildren was under the watchful eye of the state. Initially, this was done to save children from hunger after World War II. Nevertheless, since then the control over the diets of the schoolchildren was powered constantly, but the ubiquitous fast food had forced the government to more serious measures. In this sense, in 2004, the Japanese government adopted a mandatory school program called as “Shokuiku“, which means “Food education”.

The most integral part of the program is considered to be a school lunch, so called “Gakko-kuyshoku”. Within the framework of this program children starting from the first grade:

By the way the school lunch program teaches children to love nature and to gratefully respect those people, who grow and prepare food. In this sense,  the Japanese schools often invite farmers and nutritionists to speak with children on some topics related to food education, such as: Do not buy semi-finished products, Natural food is better than fast food, Go to bed early, get up early and do not skip the breakfast. Moreover, they teach children how to take fish, how to grow vegetables and fruits, and how other edible products are produced. In addition to this, the Japanese schools mostly plant their own vegetable gardens, where pupils learn to grow some vegetables and fruits by themselves.

Thus, it’s obvious that school lunches are not just a break between classes, but a part of the learning process of the Japanese schools. So, how do you think is there a need for a such kind of program in Kazakhstani context? If yes, why? If no, why not?

5 thoughts on “Food education: the case of Japan”