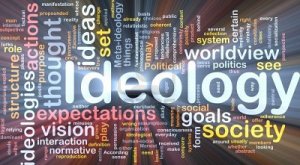 As I understand ideology is a system of values, believes, and attitudes.  Ideology belongs to the social groups. It helps us to make sense of reality, and feel the world around and understand how it should be.  First who gave definition of Ideology are Marks and Engels. They claimed that ideology is always kept by the power of elites. They suppose that dominant values belong to those who have power. Louis Althusser  (1971) says that there are two ways to make people do what they want – Repressive state apparatuses it can be a police an army, or if we talk about the school it is a principal, who order you what to do.  The second is the Ideological State Apparatuses is the way that society get the things to do the way they want, forming or shaping the way they think. According to Louis Althusser (1971) there are some features that make the concept of ideology. The first one is ideology do not have history.  This statement was mentioned in the in Marks` work that related ideology to the world of views of social classes (Kellner, 1981) however, Althusser (1971) described it from the different point of view.  He claims that ideology have own structure and functions which applied in the stable manner. Ideology has no history but, therefore, it shows itself as a permanent and valid around the history. The second is ideology operates individuals. Althusser (1971) suppose that individuals act on their own, and feel free because of mechanisms that demonstrates manners in daily life. The third is Ideology represents the imaginary relationship of individuals to their real conditions of existence. It means that ideology is people`s relation to the reality of imaginary distortion rather than distorted image of reality. Next is ideology has material existence.

People always act in the way they believe. They do actions that related to their ideology, for example, if they believe in God they go to the mosque.  Ideology hails or interpolates concrete individuals as a subject and individuals are already subjects. To simplify we can overview different kind of ideology. If for example we take Marxist Ideology we can say that they believe in the shaped property, collectivism, cooperation, social responsibility and rehouses shared by needs. Such kind of ideology belongs to many western countries.  Property rights, small government, individualism, competition, market freedom these are he values to the Capitalist Ideology. Patriarchal ideology believes in the male property ownership, male inheritance. Also they see men as protectors and man in political control. For the feminist ideology values gender equality, reproductive freedom of choice for women, equitable division of labor in the home.

This is how I understand the term Ideology. What is IDEOLOGY for you?

Althusser, L. (1971). Ideology and ideological state apparatuses (notes towards an      investigation). Lenin and philosophy and other essays, 1971-127.